The late Michael Crichton was a colossus among popular novelists, and spun off movies as quick as I make wisecracks:  The Andromeda Strain, Congo, Jurassic Park, etc.  He was also an insightful social commentator, with observations like his Gell-Mann Amnesia Effect.

Turns out he left a literary lagniappe in his papers, the historical western novel Dragon Teeth.  (Read the review for a skeptical take on posthumous novels.) 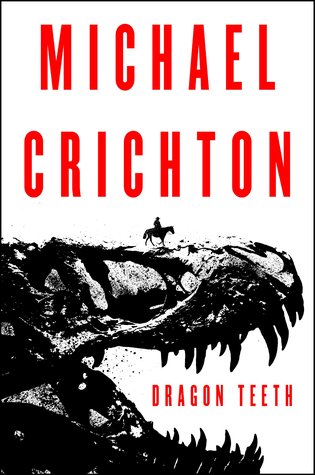 As he appears in an early photograph, William Johnson is a handsome young man with a crooked smile and a naive grin.  A study in slouching indifference, he lounges against a Gothic building.  He is a tall fellow, but his height appears irrelevant to his presentation of himself.  The photograph is dated “New Haven, 1875,” and was apparently taken after he had left home to begin studies as an undergraduate at Yale College.

A later photograph, marked “Cheyenne, Wyoming, 1876,” shows Johnson quite differently.  His mouth is framed by a full mustache; his body is harder and enlarged by use; his jaw is set; he stands confidently with shoulders squared and feet wide–and ankle-deep in mud.  Clearly visible is a peculiar scar on his upper lip, which in later years he claimed was the result of an Indian attack.

It only gets better, as our hero gets embroiled in the famous Cope-Marsh dinosaur rivalry in a truly Wild West.   I found this one on the Barnes and Noble discount table, hardback cheaper than paperback.  Read it!